All over Mexico there are small taco stands. One just opened up two doors from my house. They are very good and cheap. 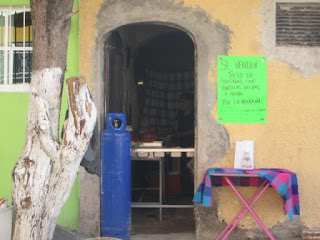 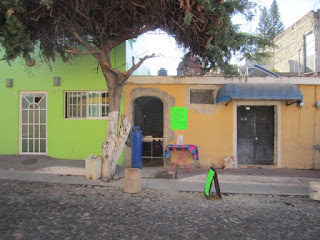 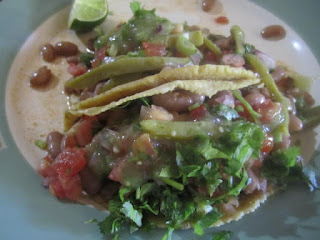 Memorial for those who have gone before us. The white rose. 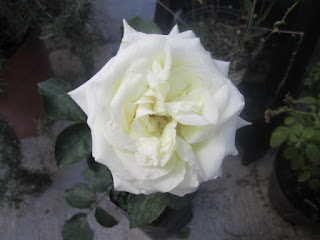 
I am still in lockdown along with all the other people sixty and over in this area. I do go out in the early mornings to take Chico for a short walk and if necessary, buy a few groceries. So far, I have not been stopped by the police.

My landlord hasn't returned  to finish his construction job. I am not unhappy about that at the moment because I am just getting over all the other clean up. I may be unhappy if he hasn't filled in those holes he made in the wall before the rainy season. I may have an unusable upstairs deck.

I have been doing a lot of work on my back yard. With the help from my friend, Dudley. Thank you Dudley!

Here are some photos and of my kitchen and back yard. Hope you are all doing well! 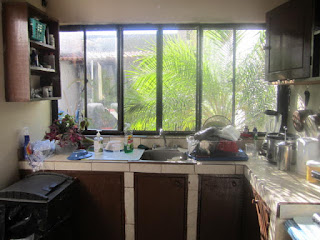 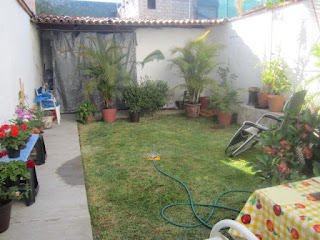 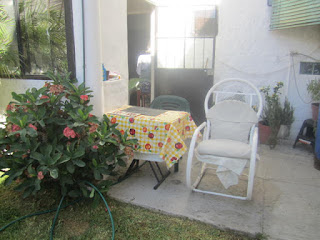 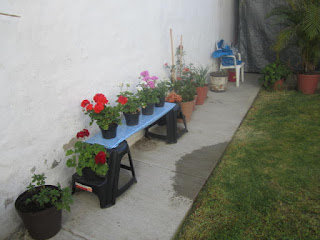 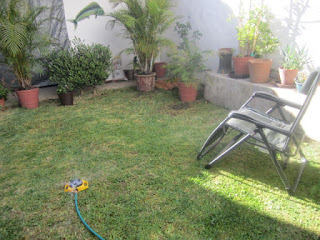 
I have been too distracted and depressed to write on the blog. Being inside all the time is driving me nuts. The stay at home order is over tomorrow for everyone except sick people and people over sixty. We are supposed to stay Inside until the end of the month but I won't be surprised if they extend it again. Maybe they will extend it for us until they get a vaccine. Maybe years from now. Maybe the rest of my life!  Don't have many years left and I hate to think it might be spent locked up in this house. So that is a big reason for my depression!

And Marie, a friend from many years back, passed away.  Her daughter let me know. Marie and I were friends from about 2008. Our sons were friends first. Marie followed me down to Mexico after she got her house sold and took care of her business.  I have many photos of her in the first part of my blog. Nothing in the past few years because we had a falling out. But her death still hit me hard.

Sometime it is more difficult when there are unresolved issues. I had an opportunity to reach out to her several months ago when her son was visiting but I didn't  take it. I didn't want to get back into all the conflict. I didn't know she was so sick. Now it is too late!

Added to all this, two weeks ago, it rained and I had a leak over my bed. The landlord came in with saws, mallets, a helper and rattled my house and tree in the front for a day and left everything in shambles. Tree limbs were all over my sidewalk and street. Rubble upstairs on my deck was in a big pile and dirt was filtering into my entire house. Four big holes had been pounded into the deck wall. And no landlord.

Finally, a few of days ago, after I had already spent days stuffing tree limbs and rubble into big bags, and hauling them to the dump on the corner, he returned and cut off even more tree limbs. And left again.  Still left holes in the wall on the deck. Then two days later, he returned and hauled away the other limbs. From a small leak over my bed, it progressed into two weeks of a construction zone. I mean deconstruction zone.

I have been too exhausted to do any more cleaning. I have done too much mopping and hauling and cleaning surfaces. And still there is dust coming into all my rooms from the deck. If It hadn't been for my friend, Dudley, coming over to help, I would have given up and just walked away!

I have rested for two days now and I am starting to make peace with the loss of my friend. And I am slowly recovering from all the chaos both inside my house and Inside my head and heart.

But I am still in lockdown. Sick and tired of cooking and cleaning.

These are the reasons that I haven't been writing. I was completely overwhelmed with sadness, frustration and exhaustion. But I am still alive. Just beat up in every way! I am one of the lucky ones.


Another day of  lost time. What day is it? What is the date?  What is the month? It is all the same to me. I enjoyed receiving all the coronavirus cartoons and jokes that my friends sent me. One in particular. I can't remember the exact wording. The meaning was, after being just with my own company for several weeks,  I apologize to anyone who has had to spend time with me in the past.

I have been worried that my internet  would be cut off. Skype is my only way of calling out and the internet has been my constant companion all this time. The office where I pay was closed down for about a month. I had no idea of how to pay the bill. Today I checked online and it is open again. So I trudged up there in the heat. Excited that I wouldn't be disconnected. I got there early and had to wait outside behind five other people. When it came to be my turn to go inside, the young woman refused to let me go in. I was wearing a mask. Everyone else had gone in and I could see no reason that I was held there. Finally, I figured it out. She said that no one over sixty was allowed in the store.

I was devastated. How was I going to be able to pay my bill? Someone nearby suggested that I give the money and bill to the woman who was keeping me out. So I did and she paid it for me.  What a relief. As I left I was wondering how she knew I was over sixty with a mask covering most of my face. I guess old age is easy to spot.

Most of the stores were closed. People rarely greet me anymore, even when I greet them first. It is as if each person is encased in a private world, hoping to keep others out. Who knows, maybe the next stranger passing by will have the virus and pass it on to me. It is also hard to know what someone else is feeling behind a mask. Is he or she smiling or scowling at me? Maybe best to just withdraw into myself and pass on by quietly, not acknowledging the other person.

Now I am back home again. At least I know that I will have a communication system for awhile longer.
at 4/29/2020 2 comments: